Mithmeoi Comics
An adorable webcomic based on everyday life.

Well here we are. Less then 24 hours left until the moon crashes into Vancouver the 12th Baktun (era) of the Mayan Calendar ends. It works like a giant clock or odometer, continually adding onto one another, so you can all relax - the world is not going to end. This doesn't mean I'm not gonna have some fun with it though! Me and my little brother have been waiting several years for this event just to nerd it up, Majora's Mask style!

At the top of the website, I'll be updating the countdown with day & night themes, as well as songs from those days in game. I don't know about everyone else.. but I'm really looking forward to blasting the Final Hours song at the end

In the meantime, I wrote up an article explaining the Mayan Calendar, and it's relation to the end of the world. It can get a bit lengthy at parts, but I don't think you'd find a shorter one anytime soon! So dust off those history books if you appreciate a good read:

There are four main types of calendars used to calculate time with the Mayans: Tzolk'in, Haab', Calendar Round, and Long Count. Why 4 calendars? Well.. the four of them do share common functions, but they were used for different reasons, such as religious events, solar events, and other specific things that happened during the life of the Mayans.

1) Tzolk'in Calendar - The Sacred Round Calendar 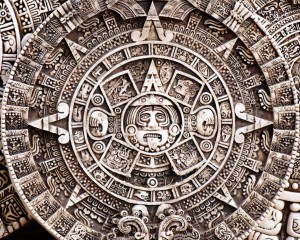 Yep. That's some pretty sexy work right there. Mayan carvings are a sight to behold.

You've probably seen it - Intricate flat, circular pictures and carvings depicting the Mayan Calendar. The Tzolk'in Calendar is probably what you were looking at (assuming it's authentic and not purely aesthetic).

The Tzolk'in Calendar contains 260 days, with each day of the year having a corresponding name. There are only 20 day names, but only 13 days within a week. Due to this offset, once 13 days were used, it would reset to 1, yet be on the 14th day of the naming convention. A bit confusing, but this picture might help clear some things:

Like the cogs in a clock...
(individual icons taken from Wikipedia)

For example, once the 13th day (B'en) was finished, it would move to day 1 but using the name Ix, instead of another Imix'. The way this was set up allowed for exactly 260 unique date names in the year before a repeat was formed.

Due to the Tzolk'in referencing dieties, religious events and ceremonies were recorded and timed on this calendar. Alternatively, due to the dieties, it was said this influenced those born on those days, much like how astrology works around the world for your sign and/or element.

Most interestingly, this calendar was used long before anyone there could write!

This one's a bit easier to exlain, as this calendar is almost identical to ours. Simply put, it's a solar calendar consisting of 365 days, made up of 18 months with 20 days each. There was also an additional short month which only had 5 days, called "Wayeb", and were considered unlucky to the Mayans.

In order, the 18 months are Pop, Wo, Sip, Sotz', Sek, Xul, Yaxk'in, Mol, Ch'en, Yax, Zak, Keh, Mak, K'ank'in, Muwan, Pax, K'ayab, and Kumk'u - Pretty much how you'd use January, February, etc, except our months don't have super awesome glyphs and meanings behind them.

Now why aren't our months this cool? (Rune pictures from Wikipedia)

Using the first month "Pop" as example, the year starts with 0 Pop until it continues to the 19 Pop. This then moves to 0 Wo to 19 Wo... 0 Sip to 19 Sip... and so on. It's good to remember that Zero was the first day/month to the Mayans. I'm always impressed in how such an ancient race actually understood the power and meaning of the number Zero...

Now as cool as it looks, the Mayans were a bit inaccurate with the Haab as they ignored about an extra quarter of a day due to the tropical year. This was a problem as the months were named after seasons, so inevitably the calendar drifted and didn't correspond to the actual solar year. I think someone lost their job over that one.

3) Calendar Round- Combining the Tzolk'in and Haab

Using the months from the Haab, and days from the Tzolk'in, you would begin to get the following:

So imagine, if you will, each of our weeks having 13 days instead of 7, and you will only have one instance of a Monday, Tuesday, etc before moving to the following month.

This repeats for a total of 52 Haab' years (or 18,980 days) before the next cycle begins. All the Mayans would throw a giant, drunken festival and make weird life decisions their mothers would disapprove of. It would've been awesome. I don't think I could wait 52 yrs for the next party though. Actually, you wouldn't even be able to tell which era you were in if it simply RESET ITSELF every 52 years! This is why they had Long Count....

Used for: Counting up from a starting date, keeping track of 52+ year cycles

I love this one. The Long Count Calendar starts from a single date, and unlike the other calendars this has a starting date: August 13th, 3114 B.C (as per our Gregorian Calendar). It's essentially the odometer, or clock of the Mayan world, and the big reason everyone is fretting over the end of the world this December 21st. More on this further down. Since the Calendar Round can only count up to 52 year cycles, Long Count was needed to keep track of the entirety of it all.

Right now we are at the end of the 12th Bak'tun. Common misinterpretations of the Long Count have led many to believe bad stuff will go down on Dec 21, 2012. All this date represents is the jump to the next 13th Bak'tun. The main misinterpretation are people thinking it works like a clock:

Doomsayer: "What happens after a clock's hands reach 12PM?"
Passerby: "The clock starts over..."
Doomsayer: "WE'RE ALL GONNA DIE!!!"

Even if the idea of the 13th Bak'tun is in question, Mayan texts don't really say what will happen at the end of it. The end of each Bak'tun is considered a time of great change, so by looking at key points of Mayan history around the turn of the last five Bak'tuns, you can see an overall pattern:

1) Beginning of 8th Bak'tun (41 A.D)
-Last of the Olmec cities remain. While some survived for over 1000yrs, these were abandoned and never inhabited again.

2) Beginning of 9th Bak'tun (435 A.D)
-Teotihuacan's influence began, at first causing new cities to be built, new dynasties, followed by a massive shit storm that hasn't been explained yet.

3)Beginning of 10th Bak'tun (830 A.D)
-Classic period ends and hundreds of cities are abandoned, and still are, to no explanation.

5)Beginning of 12th Bak'tun (1618 A.D)
-The Spanish come and get all up in everyone's face. Last Mayan empire (Itza of Lake Peten) sends emissaries to the Spanish announcing defeat.
It's important to take note of this last one (besides the fact we're currently living in it), as it provides insight on how Mayans believed the Bak'tun was drawing to a close. Another thing to notice is that, while unfortunate the Spanish took over, the Itza didn't appear to use this as their demise, but more as a sign that this was indeed a time of great change upon them.

You are awesome if you read this far! Hopefully the comparisons between the 4 calendars not only give insight into the end of the world being one giant crock, but brush up on a bit of cool history as well

If you have any questions, feel free to throw me a note or email